Christmas is definitely on its way when the Panto starts and tonight I’m visiting for the first run at The Cresset at Bretton.

My first comment is that everything is highly organised. On arrival via the main doors you are reminded to put your mask on, then I used the allocated hand sanitiser station and over to get my temperature checked. (Phew! I got a green light). Into the foyer to get my tickets checked and as I hadn’t pre-ordered a drink I went over to the allocated and cordoned off queue area to order what I wanted at the bar.

I was shown to my table by one of the staff and advised of protocol during the pantomime: If there are any drinks, food or toys that you want during the show all you have to do is tick your order off on the order pad on the table, then turn the bottle light on. A member staff will come over and take your order from you and then bring your goodies back. I would recommend pre-ordering as it makes everything easier with payments already done. You receive a reminder link from the Cresset with your tickets.

When seated you can remove your mask because most of you are going to be drinking or eating sweets or having an ice cream. However, if you need the loos, they are socially distanced too, please replace your mask and then queue as necessary, but to be fair there are not a lot of people in like usual and there’s no queue during the show. So let’s get on with the show….

Music up and lights out it’s Jack and The Beanstalk with the spritely characters of the pretty, sparkly, but dim, Fairy Liquid who, by the way, looks divine with those beautifully lit wings. The wonderful Jack who is head over heels in love with the Princess – so much so that he sells the family cow for some beans! His redheaded mother Dame Trott who has more glamorous outfit changes and witty jokes than trains leaving Peterborough station by the hour and the hair accessories to match – my favourite – The Helter Sketler. The beautiful Princess Isabelle who is in love with Jack, but doesn’t think her father will approve and then gets taken prisoner by the giant – but will Jack be able to save her? We shall have to see….

Jolly King Crumble really needs to get something off his chest about a multicolored coat. Babs the cow – a quiet part – where sometimes you’ll see her and sometimes not – maybe she’s behind you! Oh no she isn’t!!!! The evil glittering, shimmering Fleshcreep, who really is a creep to the Giant. If you see him don’t forget to stomp your feet in warning to the others. And, not forgetting, the jolly green digital Giant from the top of the beanstalk who stomps around saying Fee-Fi-Fo-Fum….He’s a new face, we’ll actually not a face at all, it’s audio only for him – a new voice in the panto scene who you might recognise to be Kev Lawrence’s from PCRFM playing Giant Blunderbore.

The cast stays socially distanced all through the show except for a kick up the backside and a high five or two with Babs’s hoof! The cast put on a good show with just a couple of extras as dancers, so, in all, a very very small cast this year. But, it doesn’t mean there’s any less entertainment for the kids. They’ll be shouting, clapping and being up and down in their seats to join in with the capers. Do you know what, it was actually nicer like this on tables rather than in those stage chairs – less people, but no less fun. Listen out for those horrendous jokes from Dame Trott aimed at you adults and apart from being in the land above the beanstalk and the Giant’s castle with the golden egg-laying goose you’ll be taken on a whirlwind tour to space and back, around a fairground and you may even get to finally hear a rendition of Joseph’s Multicoloured Dreamcoat!

I was very impressed with how everything was handled. At the end of the show you are reminded to STAY in your seats until a staff member advises you that you can leave, which will easy congestion on the way out. All in all well done Cresset. 🙂

The pantomime has been possible thanks to the grant form the UK Government’s Culture Recovery Fund. (Here For Culture) This year their charity partner is National Literacy Trust with Peterborough Reads, if you’d like to donate you can do so at the end of the show in the donation bucket.

Tickets are still available for the show which is on until 24th December. Book here (only one household per table please) All tickets are £15 per person and are bookable as a table for 3, 4, 5 or 6. At the same time as ordering your tickets you can order your food/drinks/programme/toys – or book them at a later date separately. 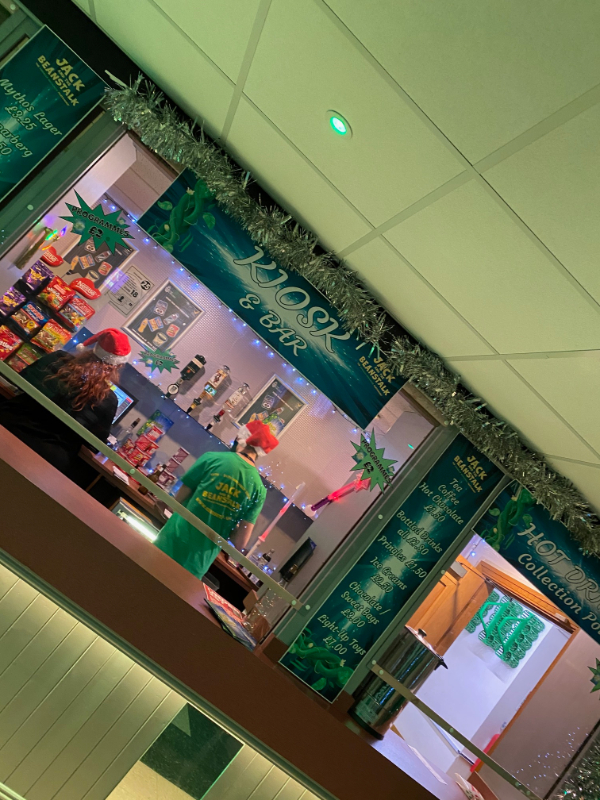 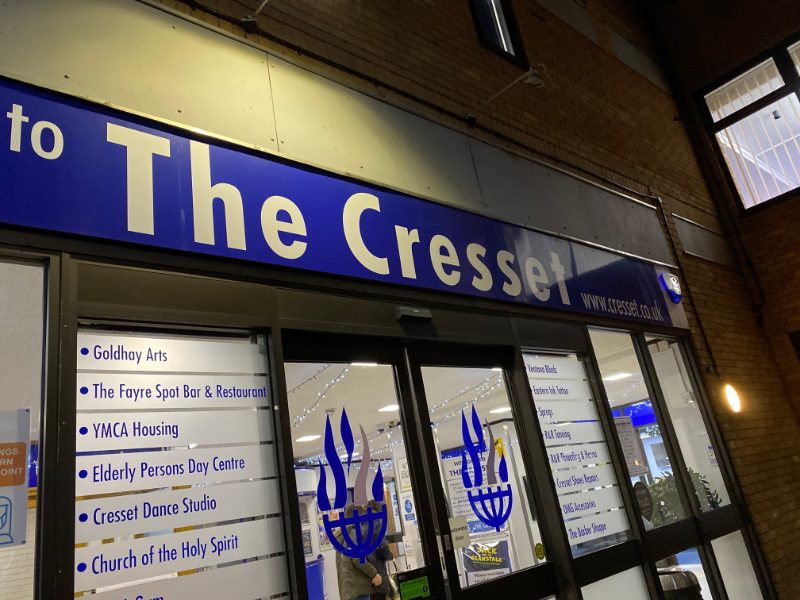 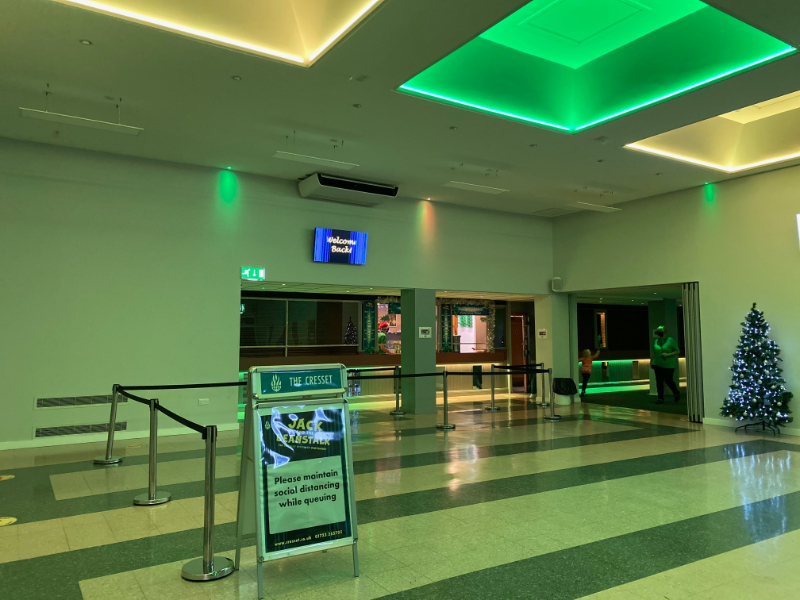 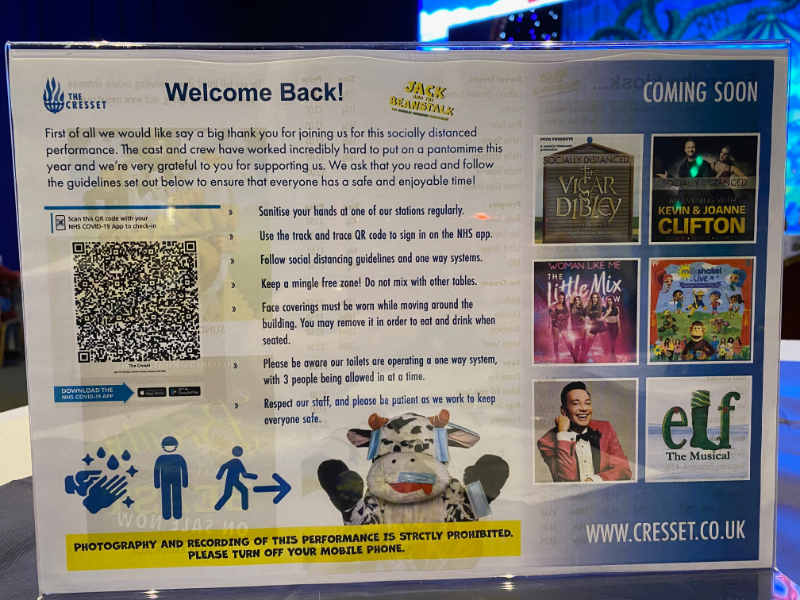 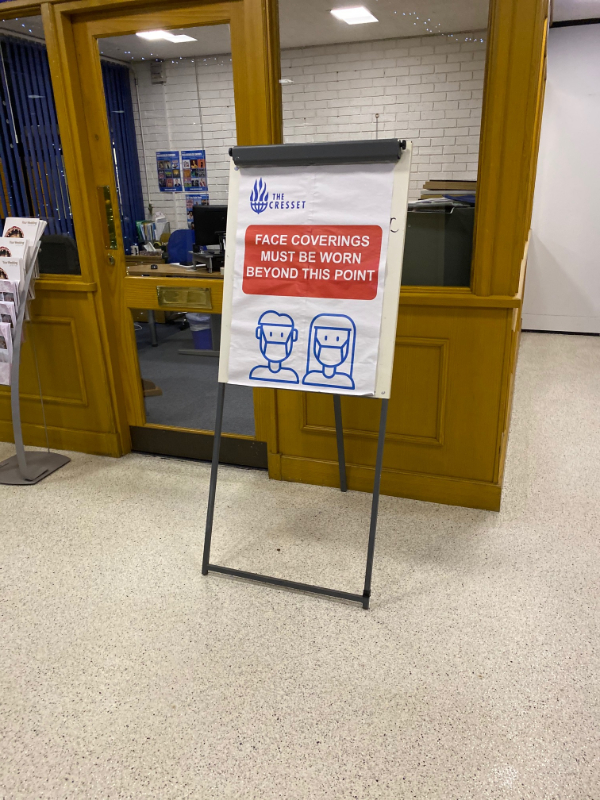 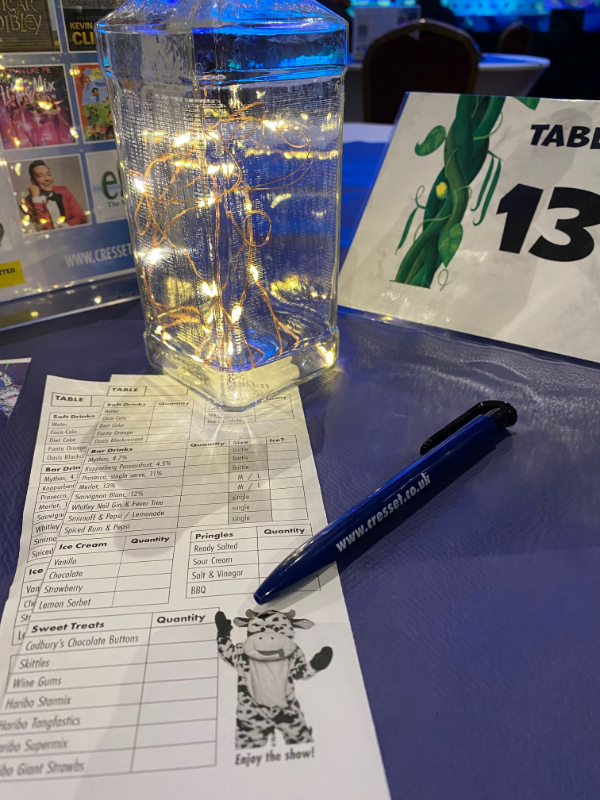 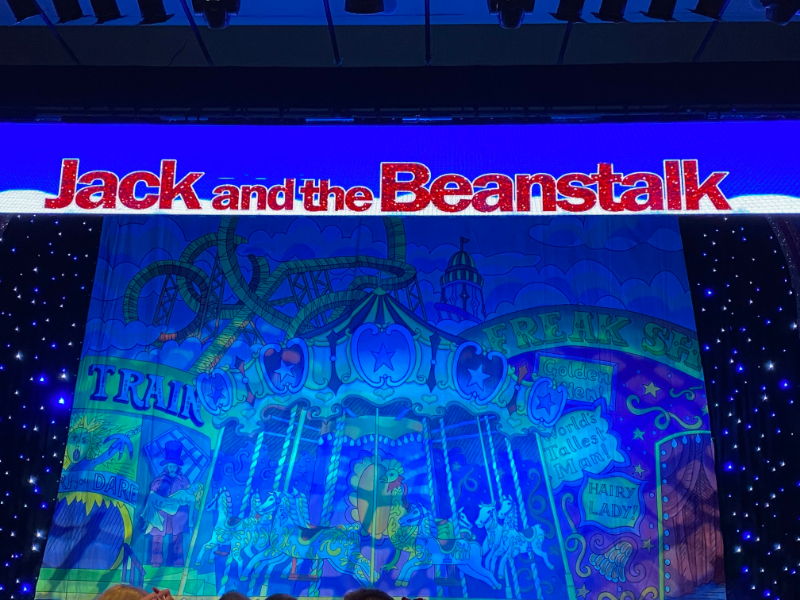 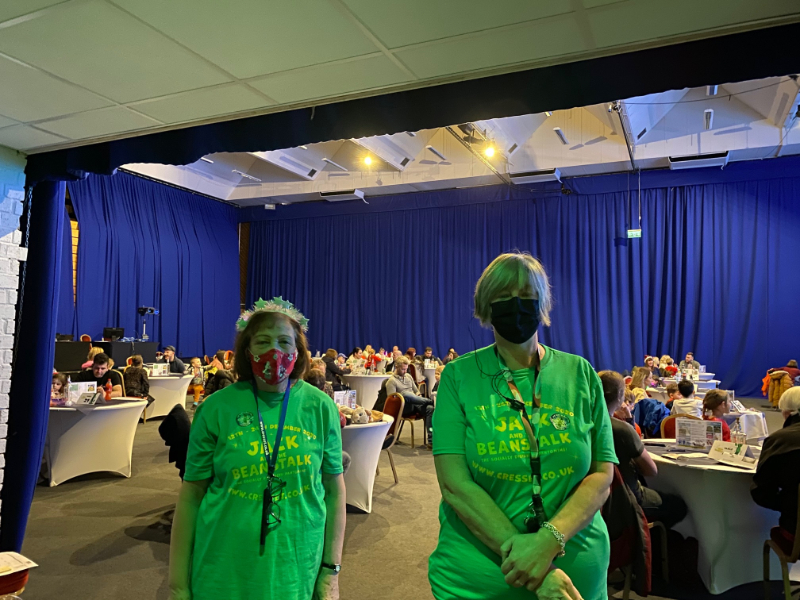 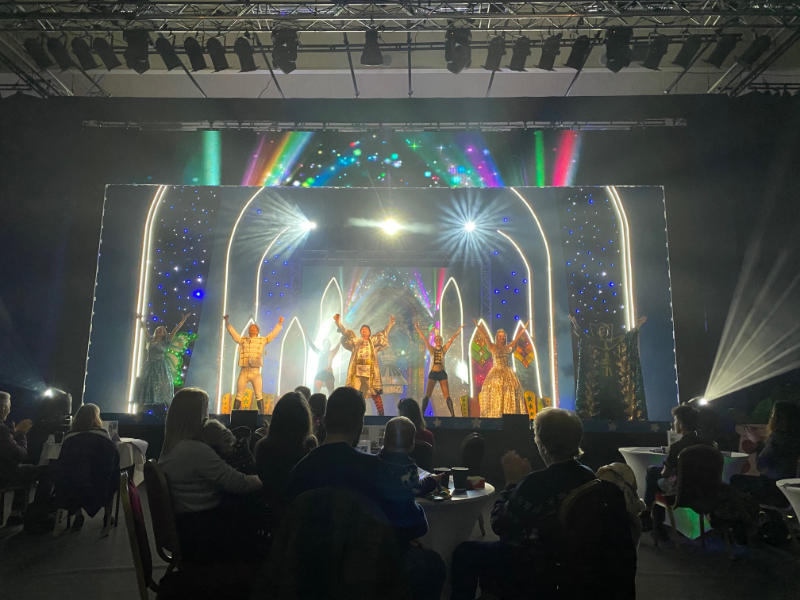 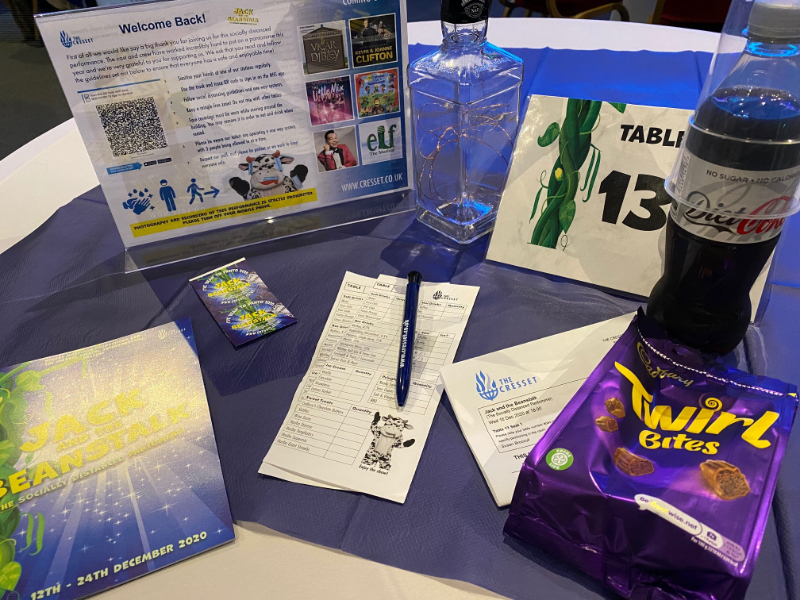 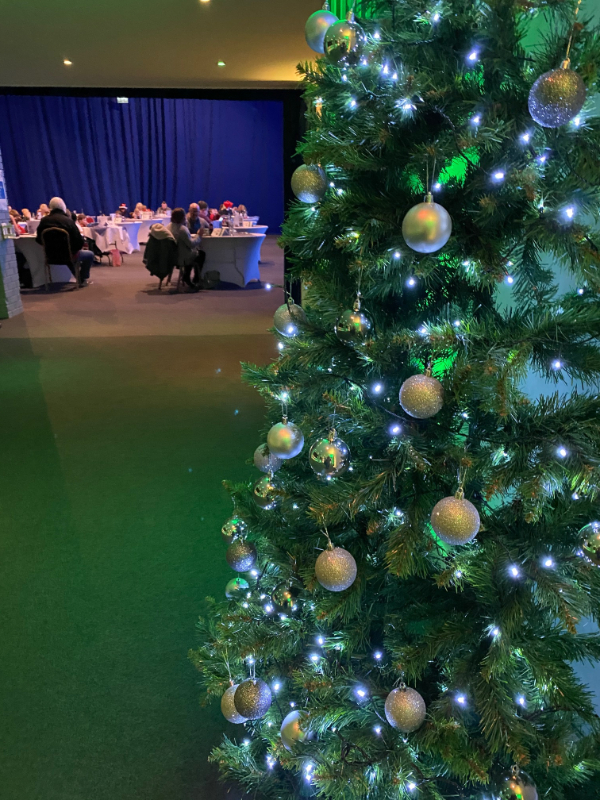 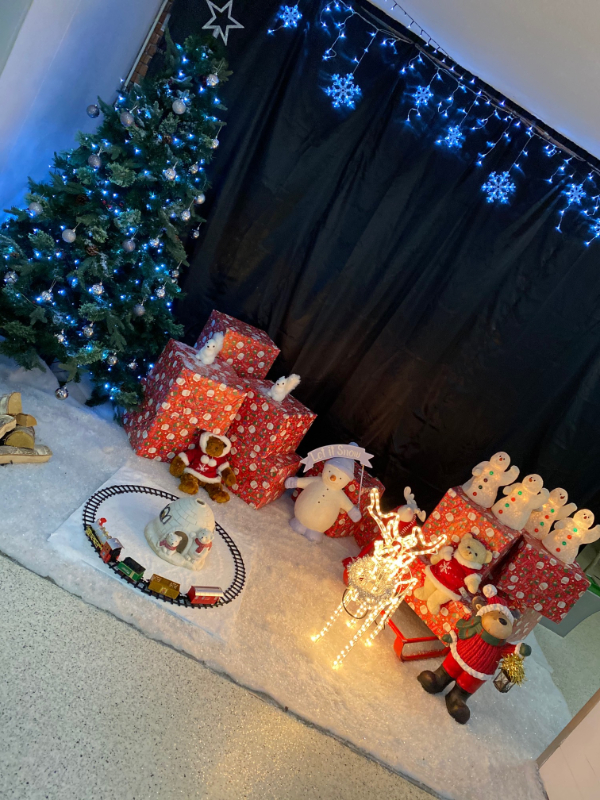